My FOSDEM talk was on IcedTea and LiveConnect. I’ve been working on a gcjwebplugin rewrite called IcedTeaPlugin on-and-off for the past five months. Whereas gcjwebplugin is a Netscape 4.x plugin, IcedTeaPlugin is an XPCOM plugin that implements OJI — the Open JVM Interface — for LiveConnect support. I showed two demos at FOSDEM, one demo for each of the two test applets I’ve used for development. Here are the screenshots, taken just after I got each applet working: 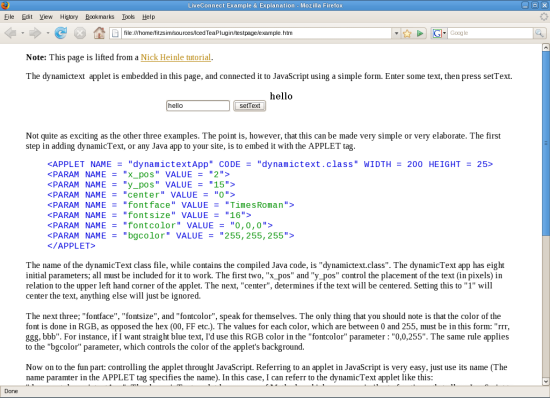 The text field and setText button are HTML form widgets. The “hello” string is passed from the text field to the Java applet on the right and displayed in bold. You can see the code in the page source of the original example.

Because of LiveConnect’s extensive use of Java reflection upon initialization, making any applet work, even the trivial “Hello, World” applet shown here, involves implementing most of OJI. 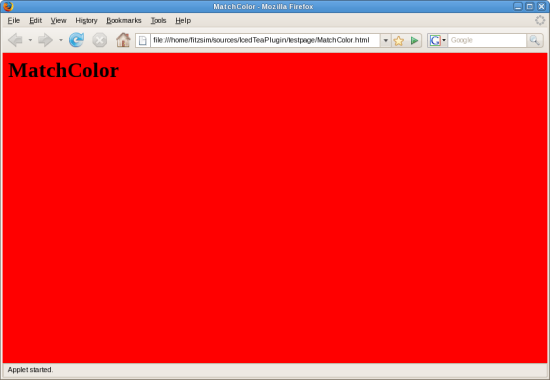 I put my presentation slides online.

I’m pleased that I was able to retain gcjwebplugin’s out-of-process-JVM design in IcedTeaPlugin, despite the fact that OJI was obviously designed with libjvm.so embedding in mind. Basic applets work but there’s still lots to be done before IcedTeaPlugin can be declared production-ready. It is hosted in the IcedTea 7 Mercurial repository enabled by the –enable-liveconnect configure option.

I learned at FOSDEM that Sun is also working on a new plugin framework, in a private repository. LiveConnect support is important to Fedora plugin users, and that’s what motivates my work on IcedTeaPlugin. If Sun’s new plugin framework were released and could be deployed in Fedora faster than IcedTeaPlugin then I’d be willing to work on it instead.